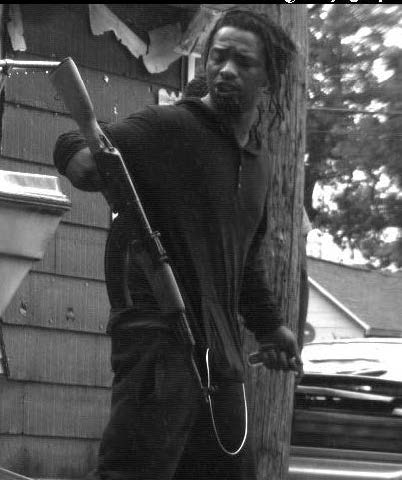 Hector pled guilty on October 5, 2018, to one count of Being a Felon in Possession of a Firearm and Ammunition, and one count of Possessing a Controlled Substance (Fentanyl) with Intent to Distribute. Hector came to the attention of police in Summer 2017 after a surveillance camera captured him walking around his home brandishing an AK-47 style rifle. Hector is prohibited from possessing firearms because he has nine prior felony convictions plus a conviction for domestic violence.
The ATF executed a search warrant at Hector’s residence in October 2017. Agents recovered two rifles, ammunition, 19.425 grams of fentanyl, other drugs, and drug paraphernalia. In its sentencing memorandum, the U.S. Attorney’s Office underscored the need to protect the community from Hector’s ongoing criminal activity. The United States noted that Hector had more than 20 convictions, and his priors include multiple drug felonies, as well as numerous instances of gun violence. “Society prohibits felons from possessing firearms and ammunition for a reason, and the defendant’s violent history is a paradigmatic example of why such laws exist. The defendant has proven through his conduct that he will readily use firearms for illegal and violence purposes. . . . [T]he seriousness of the defendant’s conduct is compounded by the fact that he possessed firearms while also possessing fentanyl with the intent to distribute it. The dangers of fentanyl are well known, and the distribution of this substance poses a great risk to the community.”

U.S. Attorney Birge stated: “Drug trafficking and firearm offenses will be not be tolerated. My office and our federal, state, and local law enforcement partners will actively prosecute these cases to help make the Muskegon area a safer place.”

The charges in this case are the result of a joint investigation by the Muskegon Heights Police Department, the Michigan State Police, and the Bureau of Alcohol, Tobacco, and Firearms (ATF). The U.S. Attorney's Office, the Muskegon County Prosecutor's Office, and federal, state, and local law enforcement are working closely together to combat violent crime and drug trafficking in the Muskegon area.
Posted by Criminal Justice News at 2:48 PM

Promote Your Page Too